This NFL Week 2, I am totally focused on a Dog Day Afternoon. So your focus should be on the majority of the underdogs.

For handicapping, I only like 5 favorites, all the others are dogs and I even like the dogs with fleas and ticks. This is the time of year to take a risk, especially when it is so early in the season.  We are still learning exactly who these teams truly are.

For the Daily Fantasy People, this is who I like: 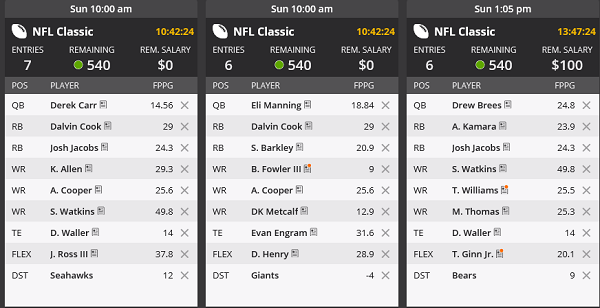 The first lineup is for the Main Contest. I like a Raiders stack because it gives you the ability to get more big named players.

For the first slate of games only, I love the Giants Stack. People are way too high on Buffalo. I like the young Buffalo team but they sucked against the J E T S, Jets, Jets, Jets and only to the ineptitude of that team did Buffalo actually get a win.

The afternoon slate is a mix of Raiders and Saints stack. I believe the Saints will be motivated to win at the Rams. Plus, you have enough big names left to make a nice score.

Have a good football Sunday people and show some love by saying some nice things about this site and share some content.

About Michael Dodd 148 Articles
I have a wide range of views and opinions. I have worked in a number of industries some of them are: Banking, Dairy, Health Insurance, Education and Government. I am the owner and editor in charge of a number of websites and message boards. Finally, I am also an accomplished no limit holdem poker player who sadly does not see enough time at a poker table.
Website

Hello Football Peeps, This is yet another week of near empty football stadiums. I hate to say this but the NFL Owners deserve everything that is happening to them. You want to enable spoiled players […]

Patriots Lose To The Carolina Panthers

Hello Football Peeps, This NFL Sunday Week 4, I am going to list my top 3 games for handicapping and I am going to provide a DFS Team. I love Miami beating the Patriots. Currently, […]

The latest and greatest sports headlines from Fox Sports.