This is a week in which you are going to find out some really big information on how good teams are.

In particular, The Patriots vs Bills game is going to be a big indicator as to who is the big dog in the AFC East. The Kansas City Chiefs vs Detroit Lion game is going to be a whopper assuming that Matthew Stafford can actually play, which seems to be the indication as of now. The Baltimore Ravens vs Cleveland Browns is another big matchup. The NY Football Giants vs Washington Redskins game could get a coach fired but most likely will expose a team and or a QB. The Minnesota Vikings vs Chicago Bears is an EPIC MATCHUP for obvious NFC North reasons. Finally, the Dallas Cowboys vs New Orleans Saints is a key matchup as a gauge to how good each team will be going forward.

As of now, this is a dumb play but I like the Detroit Lions over the Kansas City Chiefs. The issue is how injured is Matthew Stafford, which is an answer that no one knows. I can see this game being a score fest and a close game. Which is why I love the Over and the Lions.

For upsets, I like the Raiders and the Titans. To be honest you can make an argument for Miami losing a close game to the San Diego Chargers. The Chargers have played down to the competition for a decade, so a back door cover is very possible.

I still love the Chargers for a bunch of obvious reasons for the Main Slate. I also believe that Ingram and Lockett are must-haves. 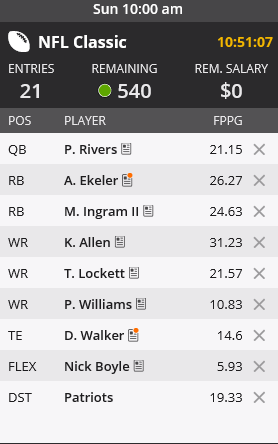 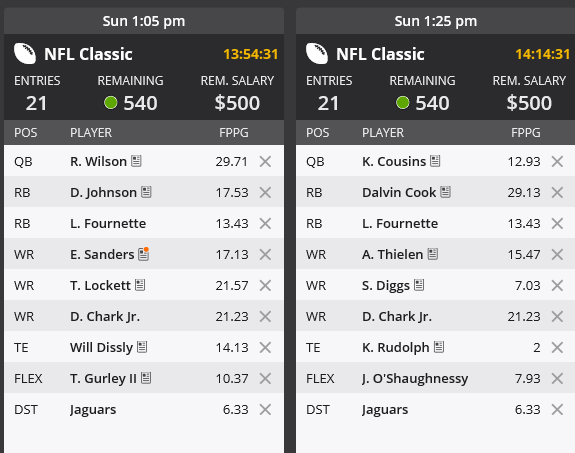 Ok Folks, have a great Week 4 and may the Football Gods smile upon you.

About Michael Dodd 123 Articles
I have a wide range of views and opinions. I have worked in a number of industries some of them are: Banking, Dairy, Health Insurance, Education and Government. I am the owner and editor in charge of a number of websites and message boards. Finally, I am also an accomplished no limit holdem poker player who sadly does not see enough time at a poker table.
Website

Hello Patriots Peeps, The New England Patriots cruise on through the Buffalo Bills, 23 to 3. This was not a pretty game but a win is a win. The goal is to get the Home […]

My Intervention For NFL Owners

Welcome to the NFL Season Peeps, First thing I am going to touch on is the New England Patriots picking up Antonio Brown. It is a great move for the franchise. It is a One […]

The latest and greatest sports headlines from Fox Sports.